By introducing and specifically targeting new proteins into cells, we aim to create systems that allow us to probe information processing in cell networks and generate new bioelectronic materials.

Our current research is focused on: 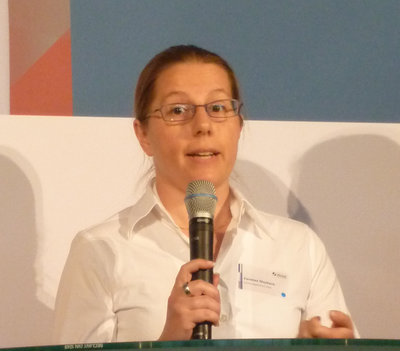 Stimulation and inhibition of neuronal signaling using light actuated channels and pumps. We utilize optogenetic actuators based on Channelrhodopsin and Anionchannelrhodopsin to manipulate neuronal networks at the single cell level with high flexibility in both spatial and temporal protocols. To expand the usefulness of optogenetic actuators, we explore tagging domains capable of subcellularly targeting the actuators and allowing their use in other cell types, such as epithelia (Fig. 1).

The membrane potential of the cell is monitored fluorescently using GcAMP or RcAMP. Though not as temporally accurate as electrical methods, GECIs provide signaling information over sizable areas without gaps in recording areas, or difficult-to-attribute multiple unit detection on a single pixel.

We use cell patterning techniques to control the connectivity of cortical neurons in vitro. These controlled patterns are aimed at producing networks capable of processing simple logic operations. The system requires bringing together single cell manipulation techniques, such as optogenetics and patch clamp, cell patterning, and readout systems such as Microelectrode Arrays (MEAs) or calcium imaging.

Not all neurons in a network have equal ability to influence signaling in the network. We are working to identify these key influencers and how different modes of manipulation at the single cell level can alter wider network signaling. This will provide the most efficient methods for correcting aberrant network activity (as in disease or injury) or for programming information into the network (as in biomimetic computing) (Fig. 2).