Jülich, 25 August 2022 - Tiny magnetic vortex structures in materials, called skyrmions, were first detected experimentally a good 10 years ago. Today, they form a basis for innovative concepts in information processing with better performance and less energy consumption. Furthermore, skyrmions influence the electronic and thermodynamic properties of a material. Because of their relevance for both applied and fundamental research, skyrmions are the subject of numerous scientific investigations worldwide and also at Forschungszentrum Jülich. Jülich scientists, together with colleagues at RWTH Aachen University and the University of Uppsala in Sweden, have now experimentally demonstrated anti-skyrmions for the first time. Jülich theoretical physicist Dr. Nikolai Kiselev, a researcher at the Peter Grünberg Institute and the Institute for Advanced Simulations, is part of the team that succeeded in making this discovery and here explains its significance.

What are magnetic antiskyrmions and why are you researching them?

A magnetic antiskyrmion is one member of a large family of objects, which are referred to as magnetic solitons. Before I come to what a magnetic soliton is, even non-physicists will no doubt notice the use of the word "anti". This already suggests that there is an opposing object that is termed a “skyrmion”. The same prefix "anti" is often used in particle physics. Relatively well known particles are, for example, muons and antimuons or neutrinos and antineutrinos. In general, the prefix “anti” can be applied to all elementary particles of the families of so-called leptons and bosons with the exception of the electron, whose antiparticle is termed a positron.

In reality, interactions between the magnetic fields of different atoms typically lead to nearly parallel alignment of the magnetization vectors, at least locally. However, such a nearly perfect order can be disrupted by different stimuli, such as external magnetic fields or temperature fluctuations. In most cases, such disturbances decay quickly, just as when we throw a stone into water. After some time, the waves move away from the initial place of excitation, their height decreases, and they are no longer visible. A similar effect occurs inside magnetic crystals for spin waves. A spin wave propagates by changes in direction of the magnetization vectors. Its amplitude decays over time, and the system finally returns to its initial state.

Solitons are special types of excitations that are able to maintain their shape in space and time. Typically, they look like isolated waves that move with a constant velocity. They are therefore often called solitary waves – meaning single or isolated waves. Imagine a single wave that propagates along a water channel with constant speed and with a height that does not decrease. (Such solitons on water surfaces were discovered by John Scott Russell in 1834). In contrast to the waves on the surface of water, solitons in magnetic crystals can be perfectly localized in all three spatial directions and remain stable even at rest, just like real particles. Magnetic skyrmions and antiskyrmions are examples of such statically stable solitons.

The reason for our interest in magnetic solitons lies not just in their striking similarities to ordinary particles. In addition, they are easy to manipulate. In particular, we can force them to move and interact with each other. For example, by varying the strength of an external magnetic field, we can destroy them and form them again. Under certain conditions, they can even form perfectly ordered patterns, similar to crystal lattices. In principle, one can perform almost any actions with skyrmions as with ordinary particles. This striking analogy between excitations of magnetization fields and ordinary particles, together with the ability to manipulate them, drives our interest in these objects.The typical sizes of magnetic skyrmions in materials can vary between a few nanometers and a few hundreds of nanometers.

On the one hand, there are several ideas for using magnetic solitons in applications as movable data bits. These concepts are similar to those used earlier in so-called magnetic bubble domain memory devices. In these non-volatile memories, bits were stored as small areas on thin films of a magnetizable material. However, they were outperformed by hard disks, which were faster and more densely writable. In addition, there are suggestions for using skyrmions in neuromorphic and stochastic computing.

In order to realise these concepts, we have to know more about the fundamental properties of skyrmions and antiskyrmions. This is the focus of our team at Forschungszentrum Jülich, which is composed of theoreticians from the Peter Grünberg Institute and experimental scientists from the Ernst Ruska-Centre.

The existence of magnetic antiskyrmions was predicted by theoretical calculations. So what made the detection of antiskyrmions possible for you?

In short, high-resolution electron microscopy and advanced simulations, as well as many years of experience investigating the material being studied, coupled with careful experimental and theoretical work by the Jülich researchers and our collaboration partners. To be honest, the discovery of antiskyrmions in an iron-germanium alloy was a surprise for us. This is a typical situation in science! As a researcher, you plan experiments aiming to observe and prove a certain phenomenon but discover something completely different and even more striking. Our experiment was originally designed for the observation of another type of soliton: skyrmion bags.

We knew from our theoretical work that we would need thin plates of an iron-germanium alloy (FeGe) to study the stability of skyrmion bags. As it turned out, such thin films of about 70 nanometers in thickness are also required to study the stability of antiskyrmions. However, we only really understood this behaviour after our experimental observations. It turned out that a plate of FeGe with a thickness of only about 70 nanometers was required. The samples of exceptionally high quality were prepared by the team of Haifeng Du at the High Magnetic Field Laboratory in Hefei, China, our long-term cooperation partner. To make the samples, they used a technique known as focused ion beam milling. They used gallium ions that have been accelerated by a high voltage and focused onto a tiny spot to cut out a square plate from a large FeGe crystal measuring just 1 micrometer x 1 micrometer in size and 70 nanometers thick.

The samples were examined by my Jülich colleague Fengshan Zheng, an expert in the imaging of magnetic and electric fields in materials, using the transmission electron microscope at the Ernst Ruska-Centre, which has one of the best electron microscopy laboratories in the world. This kind of electron microscope is composed of a vacuum chamber into which our sample is placed. An electron beam is accelerated by a high voltage and travels through the sample, where it interacts with the magnetic field distribution inside and around it. A charge-coupled camera records a projection of the magnetic field with nanometer spatial resolution. The distinct magnetic contrast of skyrmions and antiskyrmions allowed us to distinguish these particles, as well as to study their creation and annihilation.

However, in order to prove that the contrast in the images corresponded to particular magnetic configurations, such as skyrmions and antiskyrmions, we had to compare computer simulations with the experimental images. These simulations are challenging to perform computationally, especially to simulate not only the magnetic texture in the sample but also the contrast in the recorded images. Software for performing such simulations efficiently was developed by our colleague Filipp Rybakov from the KTH Royal Institute of Technology in Stockholm.

This combination of high-resolution electron microscopy and advanced simulations was essential for the success of our work. It was also important that our team had worked on FeGe for many years, accumulating extensive experience in the study of this alloy, which is one member of a family of magnets that can host magnetic skyrmions. The approach that we discovered for the nucleation and observation of antiskyrmions required careful experimental and theoretical work, including the precise manipulation of the strength and the direction of the external magnetic field around the sample.

How can research on magnetic nanostructures advance IT?

At the moment, it is difficult to estimate when our research may result in applications. However, since many researchers in the world contribute to the development of this field, magnetic solitons may find their applications soon. It is difficult to predict what these applications will be - perhaps specific chips that are able to perform brain-inspired neuromorphic computing. Such chips would be orders of magnitude more energy efficient than those of today. I can hardly wait to see where our work on magnetic solitons will bring us in a few years. 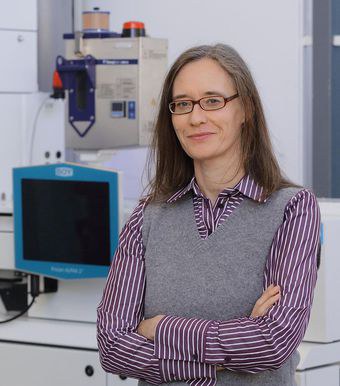